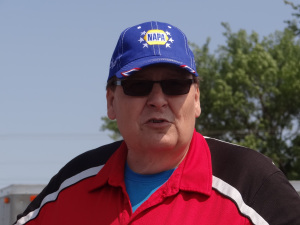 Held the 2nd Wednesday of each month.
Locations to be announced.

Having a car show?

If your club is having a car show, drop us a line and we’ll post it here for everyone to see.

The team at Don Wilhelm started a tradition at Wilhelm in Jamestown.

A fall car show at the dealership. It was a hit with over 150 cars from around North Dakota.

The Rumbler in the past had a great following, and continues with JVSM.

The James Valley Street Machines is Now Glossy with Thousands reading us monthly.

If you would like to take part in sponsoring an ad in The Rumbler, drop us an email.

Hello everybody, I’m Skovy from the James Valley Street Machines.

In 2012, Tom Ravely and myself sat down and discussed starting an organization that had no parameters of what kind of vehicle somebody drove to be a member. We like everything wings and wheels whether it’s a RC car/truck or an airplane. We wanted everybody to be involved.

We both belonged to organizations but they were restrictive about “Owning a classic car” or “Owning a Chevy, Ford, MOPAR” or whatever.

Camaraderie among all of us is what this organization is all about.

We have become a very active group with participation from all over the United States. We have had discussions with almost all the big stars that have something to do with building the most expensive and nicest vehicles around. Richard Rawlings from Gas Monkey Garage, Mark Worman from Graveyard Cars, Dave Kindig from Bitch’n Rides, Danny Koker from Counts Customs, Rick Harris from Pawn Stars and many more.

Here’s the thing … I absolutely love putting the “RUMBLER” together and hope it continues to grow!

We have 2 major cruises every year. In February, club members go on a 7-day Caribbean Cruise. Our group does get special prices. Our second cruise is a 4-day cruise with vehicles.

The Black Top Power Tour this year, 2018, we are leaving on June 21st 2018 and coming back June 24th 2018 where we are heading to the beautiful Black Hills of South Dakota where we will be visiting Mt. Rushmore, Devils Tower, Deadwood & riding on an 1800’s style train through the wonderful Black Hills.

Last year our Black Top Tour went to Warroad, Minnesota and was on a statewide tv show. Click on VIDEO 2017 to see what went on in 2017!

The James Valley Street Machines and Don Wilhelm Inc. (a local Chevrolet, GMC, Buick) dealership organize one of the biggest car & truck shows in the area. Over 125-200 cars and trucks are on display to the public and there is over $1100.00 in prizes and trophies handed out to the winners. Cars & trucks come from all over North Dakota, South Dakota, Minnesota and Montana to attend this show and get the money! This annual car show is sponsored by Don Wilhelm Inc and the James Valley Street Machines in memory of Dan Wilhelm who was taken from us way to early from Huntington’s Disease. With this show, we have raised over $110,000.00 for Huntington’s Disease from donations from businesses all over the State including Minnesota.

Also, this year, The James Valley Street Machines along with S&R Truck Plaza will be sponsoring 2 60 feet drag races. Each event will have a $1000.00 prize pool that will be distributed to 1st, 2nd and 3rd place. Cars/Trucks/SUV’s must be 100% street legal. It’s all about reaction time and hook up.

E-mail me anytime at and I will be happy to go over the details.

DROP US A LINE